There are many many opinions out there regarding the old surrogate key vs. natural key debate. Most of the times, surrogate keys (e.g. sequence generated IDs) win because they’re much easier to design:

Great. So why bother using natural keys in the first place?

Well, there is a very compelling reason!

Whenever you introduce surrogate keys, this means that your key data becomes completely meaningless. From a design perspective, that’s not too bad. You can easily join that other table to get the interesting, meaningful information that hides behind the surrogate foreign key value. For example, in our Sakila database… 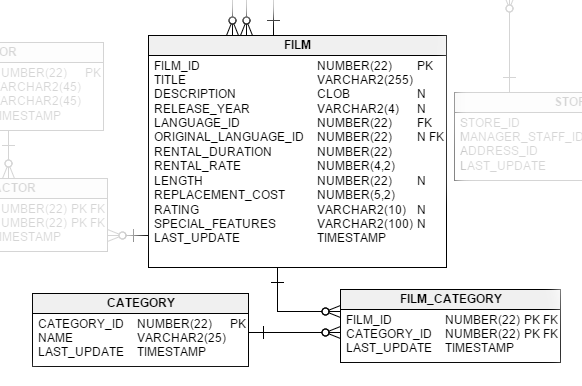 … we have a typical many-to-many relationship modelled with a relationship table between the FILM table and the CATEGORY table – state-of-the-art normalisation. But check out this interesting thing:

With this in mind, we could design a much simpler schema, where we use the category name as a natural key, and in fact, we don’t even need the CATEGORY table anymore, we can now remove it (that’s optional here. To ensure data correctness, we could keep it around, containing only the NAME column as a primary key). Check this out:

Now, if we run a query like the following one against our entire Sakila schema:

With an alternative schema where the category NAME has been moved to a new FILM_CATEGORY_NATURAL table, we could run this much simpler query:

Notice how we can omit an entire JOIN.

The execution plans (here on Oracle) are quite different. Check this out:

Unfortunately, the cost difference (8 vs 5) cannot be taken as a tool to compare actual costs between the two queries/plans. But the plans are otherwise very similar, except that we’re simply missing one table access (CATEGORY and an entire JOIN). That’s a significant improvement for something this simple. Imagine the improvement if we could roll out this kind of better query throughout the system?

We could look into more execution plan measurements (especially from the actual plan results), but what if we simply benchmark the two queries using the same silly benchmark, as always, repeating each statement 100 times:

The results are drastic:

(Disclaimer: Benchmarks are an inaccurate way of measuring things because they suffer (or benefit) from “unfair” side-effects like heavy caching, but they’re a helpful tool to assess the order of magnitude of a difference between two queries).

The JOIN is completely unnecessary

The only reason why we joined the CATEGORY table each time is because we needed to display the meaningful business value of a category to the user, the CATEGORY.NAME. We could have avoided the JOIN if that was not a requirement, but displaying surrogate keys to the user (the CATEGORY_ID) would be rather harsh, wouldn’t it?

And we’re doing this all the time with all sorts of tables. We have:

Working with natural keys can be quite cumbersome. But in some entities, the internationally standardised codes are really good candidate keys, and most of the time, they’re sufficient. What does the LANGUAGE_ID 47 even mean? It means nothing. An experienced DBA will remember, after a while, that it means “English”. But wouldn’t EN be a much better value?

You would have EN as a primary key AND foreign key value, so chances are, because everyone (including frontend developers who probably hard-code some translations anyway) knows what language EN is (but no one knows what 47 means), you will almost never need to join the language table again – except in those rare cases where you want to work with secondary language columns, such as, for instance, DESCRIPTION.

Now, imagine what happens if we search for English entries, or as in our previous example, for films of category “Classics”? Our entire JOIN graph would be simplified.

(Another place where we don’t need additional surrogate keys is the relationship table. In this particular case, there’s no such key anyway)

Our category strings are quite short. If natural keys become longer, then the duplication itself can become a problem on a lower storage level, as you might need more pages and blocks to store the same amount of rows.

Please, do take this advice in this article with a grain of salt. The essence here is to not always follow strict rules that were established only as a good default. There are always tradeoffs!

This should be quite a straightforward refactoring for many applications. If your tables are extremely obvious picks for a natural key (like the above), then do use natural keys. Your queries will immediately be faster – not necessarily much faster, but probably you can speed up a significant number of queries, i.e. take load off your entire system. Plus: your database will be more user-friendly.

In some cases, you could take this even one step further and denormalise your schema by putting categories as arrays or XML or JSON data structures directly inside your films. You’ll lose the normalisation benefits, but you could further win in terms of performance. For more details, read this very interesting article (about PostgreSQL) here: